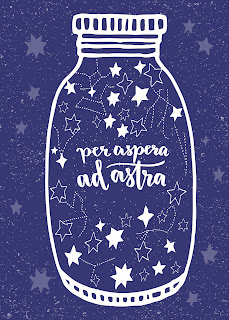 I was all set to write about how Per Aspera Ad Astra is my phrase of the year – to with “seek”, my word of the year. While I don’t think I have necessarily navigated hardship, as the phrase indicates, this speaks to me because of the shift from the negative, the hardships (to whatever degree we all face them) and the shift to reaching for the stars. Moving towards the positive – finding the good and celebrating it.

It’s astonishing how, when you land on an idea or word or thought that becomes your guide / intention, how you start to see it everywhere.

And, in honor of Mary Oliver, who died yesterday (1/17/2019), I realized that one of her poems speaks directly to this intention of mine for 2019. What better way to honor her and celebrate her, than to read and savor these words? She brought so much light into the world – I can only hope that I am able to reflect just a tiny bit of it in my own life.

The Journey – Mary Oliver
One day you finally knew
what you had to do, and began,
though the voices around you
kept shouting
their bad advice –
though the whole house
began to tremble
and you felt the old tug
at your ankles.
“Mend my life!”
each voice cried.
But you didn’t stop.
You knew what you had to do,
though the wind pried
with its stiff fingers
at the very foundations,
though their melancholy
was terrible.
It was already late
enough, and a wild night,
and the road full of fallen
branches and stones.
But little by little,
as you left their voices behind,
the stars began to burn
through the sheets of clouds,
and there was a new voice
which you slowly
recognized as your own,
that kept you company
as you strode deeper and deeper
into the world,
determined to do
the only thing you could do –
determined to save
the only life you could save.
The first line resonates so strongly for me – One day you finally knew what you had to do, and began…
Yes. Just, yes.
Thank you, Mary. Thank you for connecting me to the deeper parts of myself. More than anything, thank you for using your creativity, your light, your words, to make this world a better place. Rest peacefully, reunited, I hope, with your love. You will be missed.