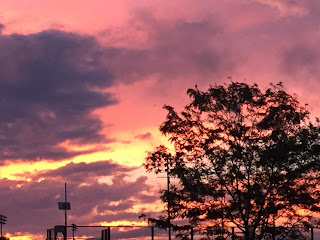 It’s not the best photo in the world. If you look closely, you can see lights and fencing for the athletic field by the tree in the foreground.

But I choose to focus on the beautiful sky. It was breathtaking.

This. This is why I wake early. (Credit to Mary Oliver for that phrase, which I love…)

I could focus on the lights and the fencing, but the sky is so much more.

Why not focus on that, instead?

Sometimes, though, seeing what we want to see, or seeing what we think is there (even if it is not) is not a good thing. I was reminded of that later in the morning, when I reread an email from my mom. I had read it the night before, and (to keep this short) thought she was giving me permission to do something when I had not asked for that.

Instead, she was actually supporting what I chose to do, and there was no element of “permission” in the email.

I thought it was there because that’s what I thought she’d do, based on what she’s done in the past.

I saw what I wanted (or expected) to see, instead of what was there.

A good lesson for me. Again.