This one got me thinking yesterday – deep thoughts for a dreary and quite frankly very frustrating day.
What are my truths?
What do I know for sure? (Channeling Oprah, here…)
What do I know to be true in my life?
It’s hard, when one does not have an established faith tradition, to identify those guideposts for life.
I suppose that’s why you see so many people writing manifestos… they’re almost the mini-scriptures of non-Bible life.
Perhaps I need one of my own. A summary of what I know for sure. I know that I would draw from more eloquent writers to generate mine, but I suspect that’s okay. There are elements scattered throughout the different treatises and manifestos I have read over the past few years. And all of them have something that speaks to me.
Hm… an interesting project. Not much of a post today, more of a circling around the questions, but… definitely something to ponder.
The Holstee Manifesto is one. Fia Skye, author of the above quote, wrote a fabulous speech called Creative Anarchy, much of which speaks to me (not just the above quote, which comes from that speech). There are others… I’ve always loved the Desiderata, since I used it at my high school graduation ceremony as our non-religious “benediction”.
Perhaps it’s time to start pulling out the pieces of these manifestos (manifesti?) that particularly resonate with me.
I’m grateful to have this time to reflect, to think, to ponder. I’ve realized that life doesn’t need to be lived at breakneck pace all the time (most of the time, yes, for me, but not all of the time…) and that taking the time to ponder some of the bigger questions is making me a more productive, and maybe an even more thoughtful human being. I like to think that, anyway. 😉
And yay, it’s Friday. One of my meetings was canceled. I think I have a plan for figuring out what the heck was so frustrating about my proposal yesterday. I get to see my awesome honors student. And I plan to purge my drawers and closets this weekend, which will feel awesome.
Time to dive in… 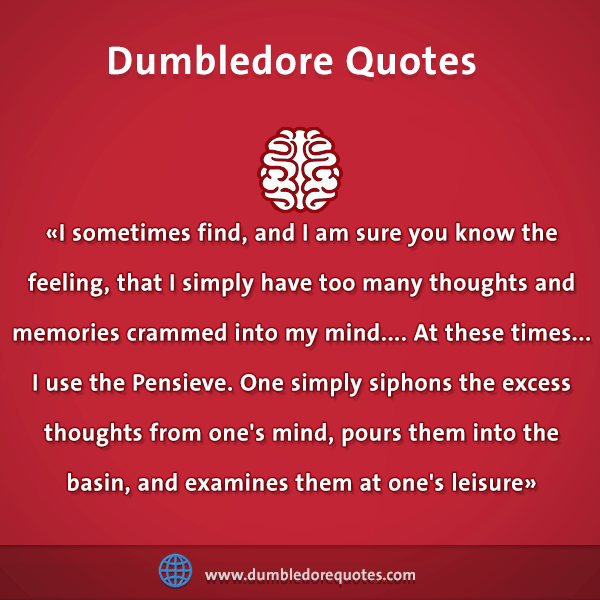 From www.dumbledorequotes.com
As usual, Dumbledore is right. I need a pensieve.
In lieu of that, I did a brain dump yesterday.
It was 2 pages.
To say I have a “monkey mind” (such a meditation thing, but it makes so much sense) is the understatement of the year.
There is always, always something going through my head. I think this is one of the fundamental differences between me and my spouse, actually – he can turn the thoughts off.  He can, as my mom always used to say, “blob”. It’s that innate ability to step away that I lack.
But if I had a Pensieve? I could siphon off those extra thoughts, save them for later, and then come back to them when I have time.
I guess the brain dump document will have to suffice for now.
In unrelated news, they’re forecasting a rain / snow mix today. Sigh. Gotta love spring in the upper midwest! I knew it would happen, I guess, but I had my hopes up that, well, we’d be spared this year. Oh, well – it’ll come eventually, right?

Unfortunately, I don’t remember from which email newsletter blast I received it, but it spoke to me this morning. A reminder that sometimes the path does appear, but it just takes longer, and may look a little different, from the path we had planned.
This is a common theme with me, but it’s starting to feel as though I am on the right path.
I just feel good – in all aspects of my life – right now. And wow, what an amazing feeling.
Now, it’s not that I’m thrilled with everything – the wider world still troubles me, particularly our politics, our divisions, and (quite frankly) our current “leader”.
But I hope – I don’t pray, so I can’t do that – but I do hope we have realized just how important all of our voices are, and the path that we are on as a country will shift back to being one that I am proud to walk on.
My personal path, though, is becoming clearer, and smoother, and (ha) flatter. There will still be potholes, I’m sure. Missing bricks. Sections missing. But to finally land on the path I’m meant to be on provides a more stable foundation than I have had in a long time.
Now it’s time to put it to good use – moving forward, while remembering what came before.

I am a creature of habit and routine. I freely admit this. My day to day life – particularly, of course, during the week – is a series of highly repetitive events, even meals. This works for me. At least, I think it does.

One of my major challenges in life is identifying when a habit or routine that I love is no longer helping me.

And yet again, Fia Skye of flyingedna.com spoke to me with her writing this week, on the Habit of Habits (https://flyingedna.com/blogs/news/the-habit-of-habits):

“Here’s the thing about habits. We make a particular choice to do something because in the moment, it seems like a solution to a perceived problem. As humans, we are constantly problem-solving. We make a choice because, given the way we’ve arranged the information we have, it’s the perfect thing to do. And if that choice works, we make that same choice in a similar situation again (and again… and again…)”

and later in her post, “So habits, perpetual choices, intentional practices, solutions we choose to address problems we perceive… are mutable, in flux, able to shift according to my desires and the vows I adhere to.”

Here’s the funny thing – I make BIG changes relatively easily. Buying a house, which apartment to rent, changing jobs (no, seriously, I’ve changed jobs and moved so frequently that my background checks are just laughable. I finally created a document that lists my known addresses for my adult life, because I’ve been asked for them so often and I was tired of using Google Maps to figure out the address of that apartment I lived in for a year back in 2001…).
But changing the small habits? the day to day routines? I stink at that. I really really stink.
Take, for example, my food. Once I find something I like, and that works for me, I tend to stick with it. I like to think I came by this naturally – my father ate the same thing for lunch for my entire childhood. My mother has done the same. My father DID change things up, but when he retired, and could take more time to think about what he actually wanted to have for lunch or breakfast, vs. just eating and getting out the door.
But I digress. Yesterday, my big step was…(you’re going to laugh)… switching out part of the oats in my granola recipe for Grape Nuts. I know, crazy. And it’s sooo good. Makes it a little crunchier and … sorry, I just love granola.
Other changes, though, I ponder and ponder and ponder forever – mostly for these smaller, daily habits.
Why is it so hard to try a different breakfast? Or maybe another type of caffeinated beverage? I fall back on the excuse of “it works for me”, but…well…maybe the alternative would work just fine, too? It just takes me so long to try that alternative that it is sometimes laughable.
I know I should try to change things up more often. But it’s hard. Creatures of routine and habit land on them because they tend to support the lives they want to lead on a daily basis. My morning is so much easier because I know exactly when I will get home from the gym, out of the shower, and to the bus stop. It’s almost, well, mindless. And that helps me get to work, get settled, and get stuff done.
Maybe in other areas, though, I could stand to lighten up a bit.
It’ll just take me a few years to get there… Of course! I know change will come eventually – something I am doing now will no longer serve or help me. But until I get to that point, well, I’m stubborn and resistant to change. And it  remains to be seen whether, well, I really NEED to change. I like the steps that Fia outlines in her post: “How, or to what, is this (fill in the blank with a particular habit) a solution?” She uses it for BIG habits (hers is waiting for others) but… maybe I could use it for my little ones? “How is (eating the same thing for lunch every day) a solution (or, working for me)?” Is this a habit that supports me in the life I want to lead? If not, then, well, it’s time to revisit it. If it’s not hurting anyone… well, I’m not inclined to change it. I know that change will come, incrementally, when I need and want it.
So this was a circular post, really. But I do like the idea of at least examining my habits and seeing if they serve me. If not – time to find an alternative. It’s a start, at least.

… So how do THOSE all fit together?

I get these “emails from the Universe” every weekday. Some days they’re pretty out there, yet other days, the brief statements just, well, speak to me.

Monday’s was one of the ones that spoke to me:

There are so many things you don’t know. Things, quite frankly, that you can’t know. About the magic, the unseen, and the miraculous logistics that can so swiftly change a life. It’s enough to daunt even the hardiest of souls. But, then again, one needn’t learn the mysteries of the wind, to sail effortlessly around the world, either.

That last part (…one needn’t learn the mysteries of the wind, to sail effortlessly around the world, either) made me sit up and take notice.
Sometimes, it’s not about pursuing the same path.
Sometimes, it’s about jumping, and knowing (and hoping) the path will appear.
Dogged determination and persistence are all well and good, but, well, sometimes you just have to trust that a change in direction is the right choice.
This has been a hard lesson for me to learn. Of course.
And yet, I’m closer than I have been.
Finding MY true North… what an idea!
I also follow 2 bloggers who alluded to this idea in posts recently.
Katie, at Talk Less Say More wrote a wonderful post a few weeks ago (I’m chronically behind on blog reading…) that “Not everyone is going to resonate with your message, vibe with your energy, understand your humor, see your heart, believe in your mission, or want to stand by your side… YOU BE YOU. I’ll be over here BEING ME…” (http://www.talkless-saymore.com/that-moment-when-you-need-to-take-back-your-power/)
And then Lindsay, from Bourbon, Lipstick, and Stilettos, posted about Enjoying the Simpler things. One of the paragraphs really stood out to me: “My hope for you is that you’re able to enjoy the simple things. That you make time for you. That you’re able to enjoy reading or writing or creating. That you’re able to enjoy those you love. That you can get out of bed and enjoy a beautiful, warm spring day. That you’re not accepting nonsense. That you say no to shit that doesn’t serve you. That you feel free from pressure and sadness. That you feel happy. That you feel free.” (http://bourbonlipstickandstilettos.com/2019/03/enjoying-the-simple-things-a-challenge/)
What a concept! Not hurting others, or neglecting them, obviously, but finding what feeds YOUR soul. What makes YOU happy. And, as Katie said, remembering that is not going to be everyone’s cup of tea.
Being comfortable with being me. I like it.