OK, I could have sworn that I wrote a post about this word before but… I haven’t. At least not that I can find using the search function (and it’s not like I have written that many posts!).

I love this word. I learned of it last year, when Holstee wrote about the word in one of their reflection emails. It really resonated with me, and I think it does for a lot of people who learn of its definition, particularly in today’s world, when you may feel alone on a crowded bus or street.

So what does Sonder mean? 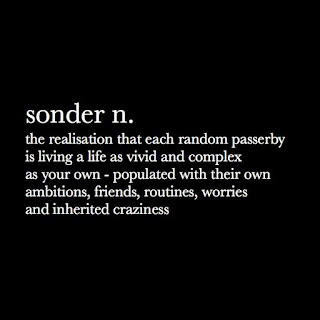 Another site has a longer definition, which I like even more: …the realization that each random passerby is living a life as vivid and complex as your own—populated with their own ambitions, friends, routines, worries and inherited craziness—an epic story that continues invisibly around you like an anthill sprawling deep underground, with elaborate passageways to thousands of other lives that you’ll never know existed, in which you might appear only once, as an extra sipping coffee in the background, as a blur of traffic passing on the highway, as a lighted window at dusk.

It reminds me that everyone is living their own life – completely unaware of my life – and that I have no idea what is going on in theirs. It’s one reason why I have tried harder as I’ve gotten older to just be kind. To never assume that someone has bad intentions or is intentionally trying to hurt me.

Just to be clear, this doesn’t extend to people I know better, who have shown their true colors, and who I know may not have my best interests at heart (to put it mildly).

But strangers at the grocery store? on the bus? I just cannot imagine that they have “ruining Anne’s day” at the top of their list. They have no idea who I am – they are caught up in their own lives … and since I have no idea what is going on in those lives, who am I to judge?

I wonder if anyone has made “sonder” into a verb? “Sondering” sits better with me – realizing (or, perhaps recognizing?) that everyone is living a life as vivid and complex as mine… and that I will likely never know what happens next in the epic stories of their lives.

One thought on “Sonder”